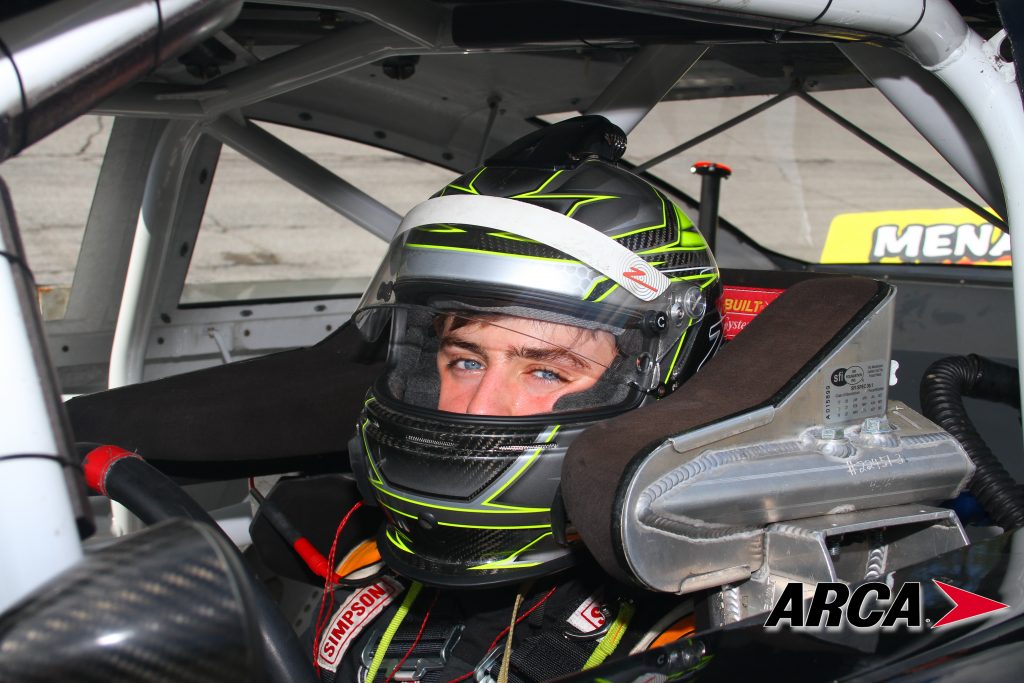 Kaden Honeycutt (No. 43 C&S Trailers Ford) made his debut in the ARCA Racing Series presented by Menards in the Kentuckiana Ford Dealers Fall Classic 200 at Salem Speedway. Honeycutt finished 19th due to a broken oil line after racing up to the second position.

Honeycutt, a protege of current Monster Energy NASCAR Cup Series driver Chris Buescher, qualified seventh and spent the early stages of the race in the back half of the top ten. After a mid-race round of pit stops, Honeycutt knifed his way through the field to the front.

He was tenth at lap 112, and by lap 129 he had raced his was to second. Unfortunately, that's when smoke erupted from the hood of his Empire Racing-fielded Ford, bringing him down pit road at lap 132, prematurely ending his day.

Honeycutt intended to make his debut the weekend prior at Lucas Oil Raceway, but weather had other intentions.

"Our first scheduled race was Lucas Oil Raceway, but the weather got the best of us there," Honeycutt said. "My friend and mentor Chris Buescher told us to head to Salem. With such short notice, we did not have time to test. It worked out well, as Jeff McClure and the guys had the car dialed in. Salem Speedway is by far the most fun I have ever had driving a race car. It is white knuckle driving, every single lap. I can't wait to return in April."

His first experience in the ARCA Racing Series was vastly different than his previous racing experience, which has mainly been Legends cars, with some late model races in recent months.

"ARCA provides me with numerous firsts," he said. The General Tire radials, big heavy racecars, live pit stops, 200-lap races, and the chance to compete against some of the best short track racers in the country.

"None of this would not be possible without the people that support me, and believe in my dream," he contiunued. "My parents, Jeff McClure, Chris Buescher, Empire Racing, CS Trailers, Iron Bull, Sems Car Wash, United Nissan, and all the guys that donate there time to help us with the car and team."

The ARCA Racing Series presented by Menards returns to Lucas Oil Raceway for the rescheduled Shore Lunch 200 on Saturday, October 6. Practice is scheduled for 1 pm ET, General Tire Pole Qualifying is set for 4 pm ET, and the race will go green at 7 pm ET. ARCARacing.com will have live timing & scoring, track updates, and scanner audio free for registered users.