The CARS Tour win at Ace was his third series win.  This season has seen the team show plenty of speed, but for a variety of reasons has not been able to crack victory lane. That wasn’t an issue at Ace. He qualified second quickest at Ace and led 89 of the race’s 125 laps.

“It feels awfully good to finally be able to win a race with this Nelson Motorsports team,” Honeycutt said.  “We’ve been trying so hard all year, and things just haven’t fallen our way when we’ve needed them to.  I love Ace Speedway, and I had a lot of confidence coming in that we could win here if we qualified well and hit the setup.  That’s exactly what happened.  I can’t thank everyone on the team enough for believing in me and staying with me all season.  This win is probably even sweeter because it took so long to happen.” 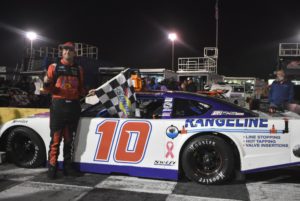 The next night, he drove for R&S Race Cars, headed up by former NASCAR crew chief Marcus Richmond.  This was a pairing that both Richmond and Honeycutt had talked about making happen for some time, and it turned out to be a winning one.  He qualified fastest and led all 125 laps enroute to his second victory in 24 hours.

“Wow, what a weekend,” Honeycutt exclaimed after the race.  “Between the two races, we led over 200 laps, more than we had all season long.  This sport is a team effort.  I’m just the lucky one who gets to drive cars like the one Marcus Richmond prepared tonight, and the one Nelson Motorsports prepared last night at Ace. I cannot thank both teams enough for the work they put in.  We started on the front row both nights, and that put us in a great position to win. Qualifying is so important in these cars because a lot of the time there are 12 to 15 cars that can win, so starting position is important, and we had that this weekend.  Thank you to my sponsors, including Solid Rock Carriers, Friends of Jaclyn, Autos By Nelson, R&S Race cars, Pepper Jack Kennels, Matco Tools, Rangeline, Dream Work Motorsports, and all my family for their constant support.”

Success has come often for Honeycutt over the past several weeks, as he also picked up two big dirt-track wins, including a $10,000 to win race at Golden Isle Speedway in Georgia and a win at Rocket Speedway Park in Texas.  He also had a career-best 11th place finish in the NASCAR Camping World Truck Series at Talladega driving for On Point Motorsports, the team he works with during the week.

Honeycutt may have had a little help from above at Talladega.  His grandfather passed away on the 27th of September and service was the day of the race.  He had told Kaden that no matter what, he wanted him to go and race, and that’s exactly what the young driver did.  He will finish the season in the No. 30 Toyota Tundra and is working with his team to put plans in place to race Trucks full-time in 2023.

Honeycutt and the Nelson Motorsports No. 12 team sit second in the CARS Tour championship standings with one win, five top fives, and 11 top ten finishes in 13 races, just nine markers ahead of third place Connor Hall.