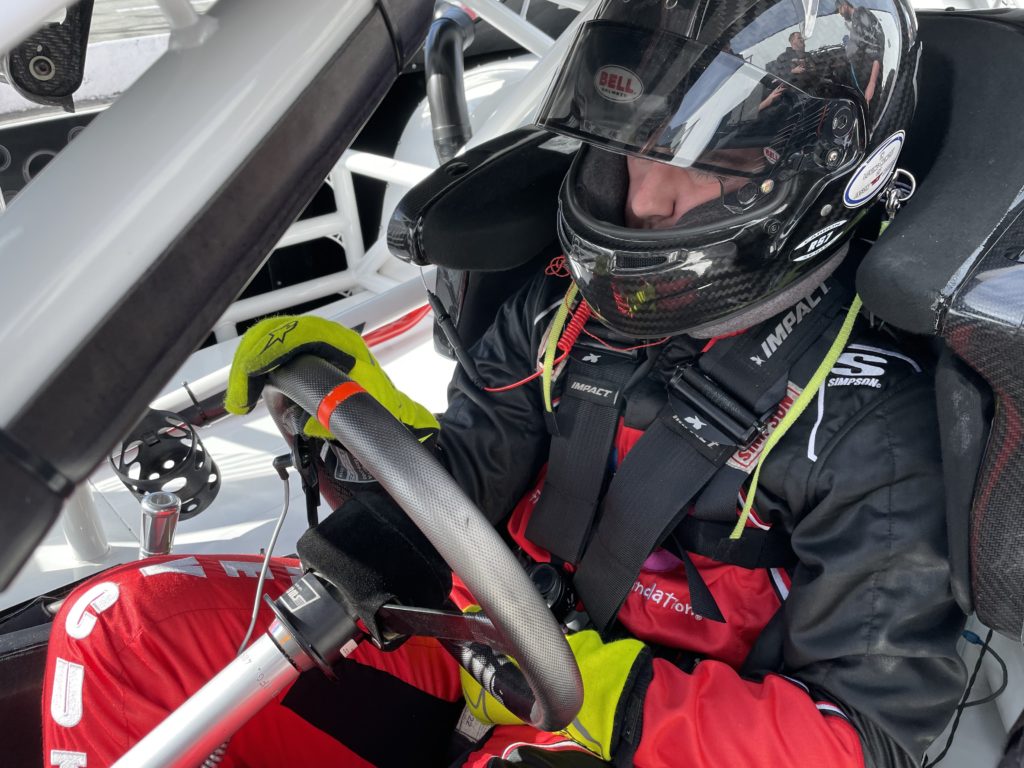 MOORESVILLE, N.C. – When driver Justin Johnson made the decision to cut back on his driving and focus on his new development team for 2021, he and his team went looking for a young, up and coming racer with proven success who was ready to shine on a major stage. Enter 17-year-old Aledo, Texas native Kaden Honeycutt, who was looking for an opportunity to come to NASCAR country and make his mark.  The CARS Racing Tour was exactly what Honeycutt was looking for and after a successful test in the car at Orange County Speedway in Rougemont, North Carolina last weekend the decision was made to move forward.

Honeycutt, who has proven he can run with the best on both pavement and dirt, is coming off a top-five finish at the Snowball Derby last December at Five Flags Speedway in Pensacola, Florida, where he was the first driver across the finish line who had no prior NASCAR national series experience.  He had never driven a NASCAR late model stock car, but it didn’t take long for him to get up to speed on a cold afternoon with little grip in the track.  That quick adaptation told veteran racer Johnson all he needed to know.

“I am extremely excited to work with Kaden,” Johnson said.  “I feel like he is the perfect fit for our program. I honestly believe with the speed and feedback he has shown he can help our growth as much as we can help him. Kaden’s performance and professionalism on and off the track speaks for itself. The team and I believe in him 100 percent, and I believe the potential is there for him to be the next superstar.”

Of the decision to get out of the driver’s seat and put Honeycutt in, Johnson said, “Our team is extremely excited for Kaden to be our first driver and a building block for the future.  As I reach my mid-30’s, having drivers like Kaden is extremely rewarding and makes it easier and easier to step away from the driver's seat. Of course, we wish we had the luxury to have Kaden for more than one year, but we intend to win enough races in 2021 and put Kaden in a position to be ready to step up the ladder if the opportunity presents itself. Our intentions in the years to come are to continue to provide a first-class team that serves as a step for young drivers wanting to learn what it takes to succeed at higher levels. We want to win every race, but unfortunately, that is not realistic.  Out of respect for everyone on the team and myself, whomever we decide to take to the racetrack we will be going to win, and we intend to work only with drivers who we feel will give us that opportunity. We are incredibly lucky to have teamed with Kaden this year, and we look forward to winning some races and competing for a championship in the CARS Tour.”

The young competitor was smiling from ear to ear when he was asked about the team, the test, and the opportunity.  “I am excited about running this season with Justin Johnson Racing in the Cars Tour Late Model Stock series,” Honeycutt said. “Testing this last weekend at Orange County Speedway was certainly a different challenge driving-wise. The Super Late Model I am used to driving and a Late Model stock are 2 completely different cars. I adapted quickly and started driving harder and harder each run. The team is very professional and knows what they’re doing. I really enjoyed Justin and the team I was working with and I cannot wait to compete for the CARS Tour Championship. My goal is to make a statement this season and run for the win in every event we go to.  I will have the team to do it. The rest will be up to me.  I want to say thank you to Race Face Advancement and to everyone who has helped me in any way to get to this point in my young career.  2021 is going to be a fun season!”

The new combination will make their season debut this Friday and Saturday, February 5 and 6, at the Florence Motor Speedway in Florence, South Carolina where Honeycutt will race in the 125-lap late model portion of the Icebreaker event.  Johnson was happy for the opportunity to get a race in with his new pilot prior to the March 6 CARS Racing Tour debut.

“It’s a pleasant surprise to have Kaden in the car a month early at The Icebreaker,” he said. “I’m excited for Jason Stanley and myself to have a warmup with him ahead of the first race for the CARS Tour.  Florence gives Kaden an early opportunity at one of the toughest surfaces in the region to learn how to manage the race and the tires in order to be there at the end. We’ve had great runs at Florence the only two times we’ve visited with me in the seat leading several laps in both races, so I fully expect the same with Kaden in the seat.”